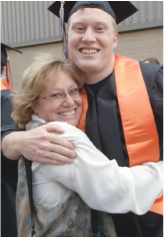 Elizabeth, a former school teacher, has been involved in
therapy massage for several years. It was her father's
influence that gave her such an interest. He was her
inspiration as he lived through several years of pain
during an extended illness. It was massage that often
brought him the most relief.

Elizabeth owned and operated a thriving clinic in Dillon
prior to relocating to Hamilton in the Bitterroot Valley of
Montana. She is currently accepting new clients.
Powered by